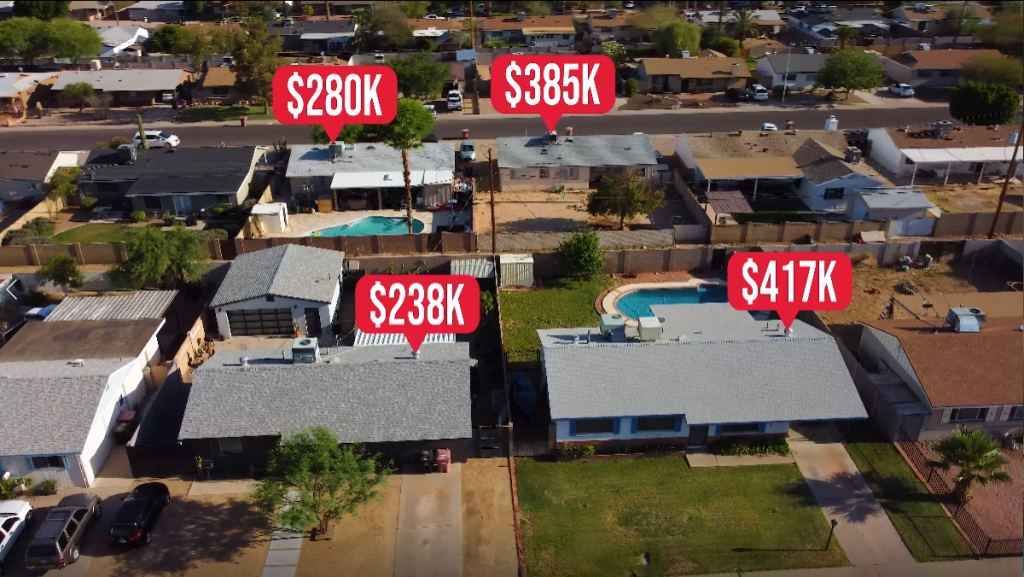 What Are The Best Scottsdale Neighborhoods?

In this Part 2 of 4 series of You’re Not Buying A Home, You’re Buying A Neighborhood, we dive into the Central Phoenix real estate market, and look at some of the most popular Phoenix neighborhoods to live in.  Sometimes when searching for a new home it can be easy to get lost in what the actual house has to offer, and not consider all of the other factors. Home buying is much more than just buying a physical house. In reality, when purchasing a home you buy the entire neighborhood that home is in. Being aware of this can work in your favor because with this in mind you can find an amazing home to reside in and an amazing community to live your life in! 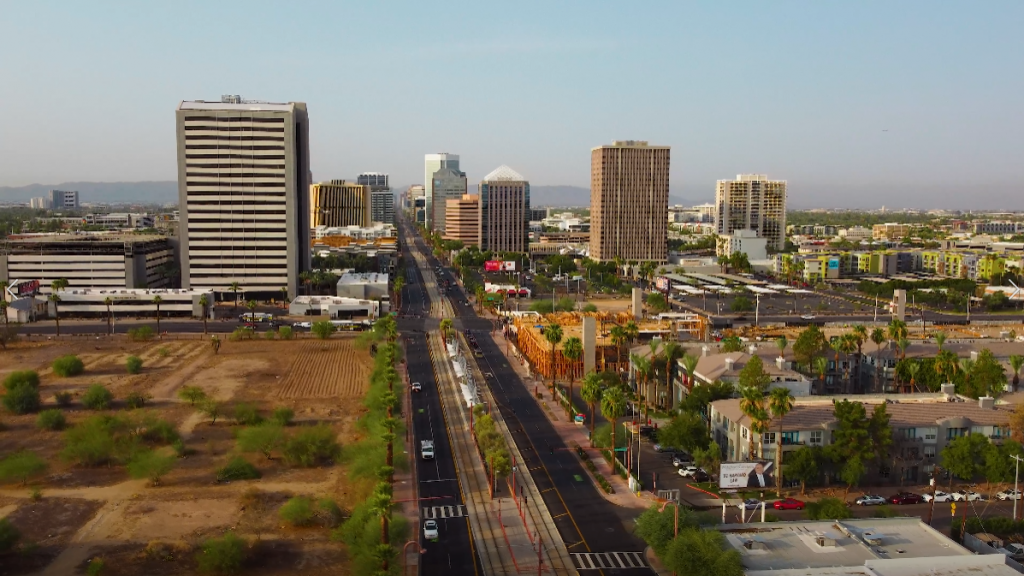 Phoenix is not only the capital of Arizona, but it’s also the biggest magnet, for both tourists and those looking to move to Arizona, in the state. Phoenix is located in Maricopa County and offers its residents a mix of an urban and suburban feel. The population in Phoenix is 1,633,017 people. So, it’s rather densely populated when compared to other suburbs in Arizona. There are slightly more homeowners in Phoenix than renters. With 54% of Phoenix residents owning their homes, and 46% of residents renting their homes. The median household income in Phoenix is $57,459. The median home value is $235,400. This is very typical for Arizona and is slightly lower than the median home value in other cities within the state. The median rent in Phoenix is $1,053. Which is also standard if not slightly below averages compared to other Arizona suburbs.

Phoenix comes highly ranked in a few categories, but may not have as many awarded rankings as some of the other cities in the state. Nonetheless, Phoenix is ranked #58 for Most Diverse Cities in America out of 228 cities. This is because Phoenix is more heavily populated than other cities in Arizona. Therefore, it has much more diversity and culture to offer its residents. Phoenix is also ranked #64 for Best Cities to Retire in America out of 228 cities. Additionally, Phoenix holds the #92 spot for Cities with the Best Public Schools in America. 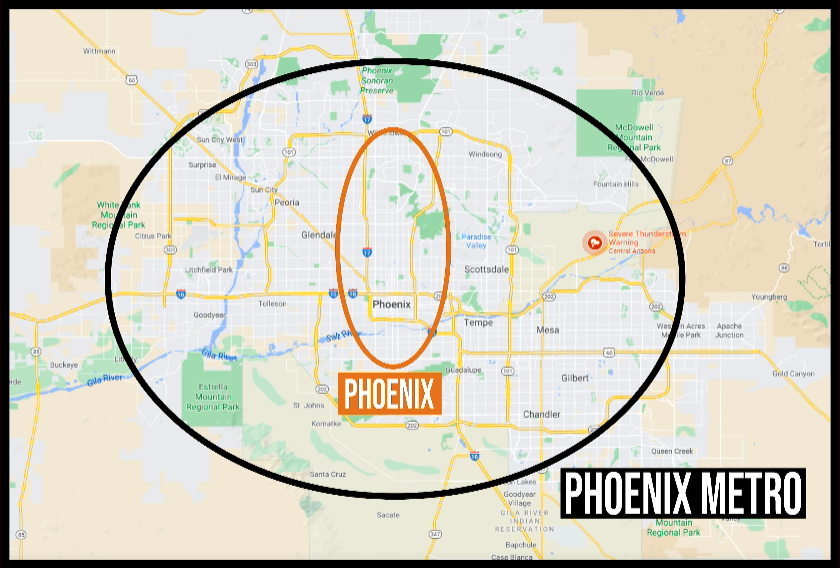 Phoenix does have a number of excellent school options. The BASIS charter schools are seen throughout Arizona, but they have a few campuses in the Phoenix area. These schools all hold an A+ grade. So, if you’re looking for an exceptional public school to place your kids in be sure to check out the BASIS Phoenix and Ahwatukee campuses. If you’d like to place your kids in a private school, then Phoenix also has quite a few suitable options to fit your needs. Some of the best private schools in the area are Brophy College Preparatory High School (rated #1 in Best Catholic High Schools in Arizona) and Gary K. Herberger Young Scholars Academy ( rated #6 in Best Private High Schools in Arizona). 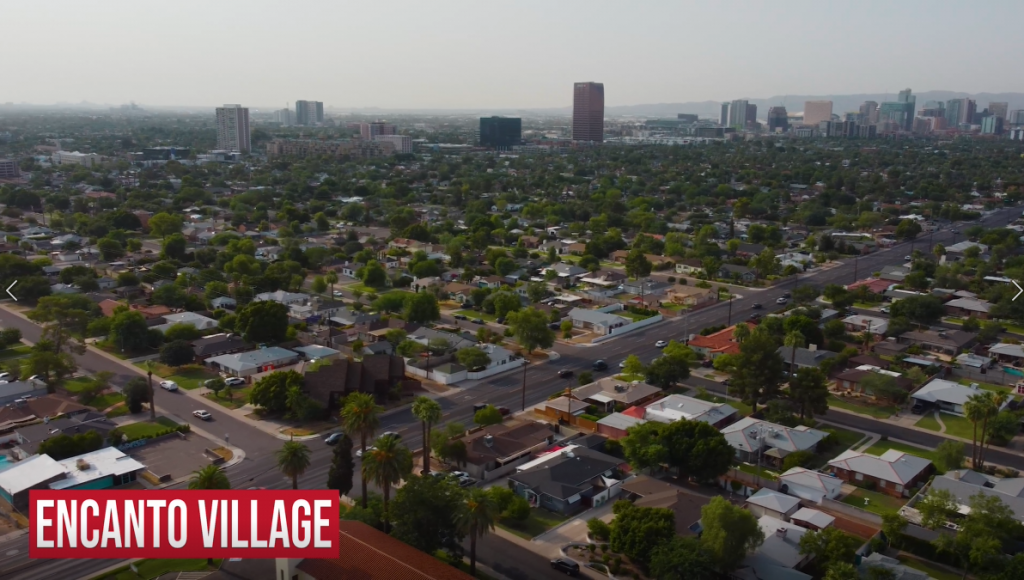 In Phoenix, you’ll find a variety of activities to engage in. There’s access to everything from amazing mountain parks to fun social events in Phoenix. Be sure to stop by the Desert Botanical Garden. This beautiful garden spans 140 acres and houses over 50 thousand plants. Also, check out the Japanese Friendship Garden for an experience that takes you out of the desert. To see some amazing artwork venture into the Roosevelt Row neighborhood. This is a walkable art district where there is an endless amount of art to see and little boutique shops to explore. Also, be sure to join Phoenix’s First Friday celebrations. On the First Friday of every month, Phoenix hosts a variety of different food trucks, art galleries stay open late, and people explore all the neat activities lining the streets. 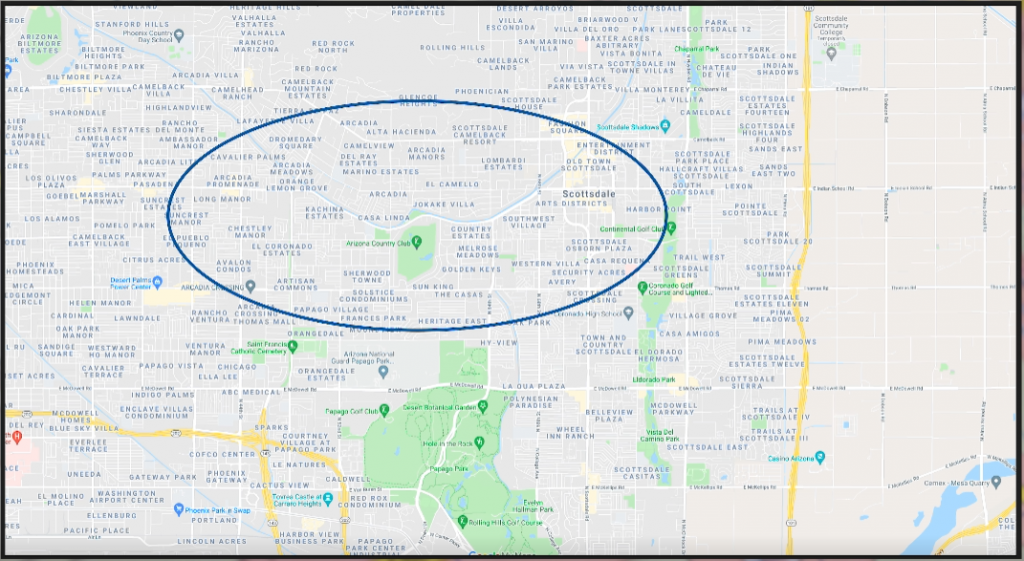 Scottsdale has collected a number of high-ranking spots both within Arizona and within the country. For one, Scottsdale is ranked #1 for Best Cities to Retire in America out of 228 cities. No wonder 24% of Scottsdale residents are 65 years or older. Scottsdale is also ranked #22 for Cities with the Best Public Schools in America out of 228 cities. So, if you’re looking to move your family into the best Scottsdale neighborhoods you’ll find a selection of great schools to place your children in. If you’re interested in overall quality of life Scottsdale ranks highly in this category. Coming in at #24 out of 228 for Best Cities to Live in America. 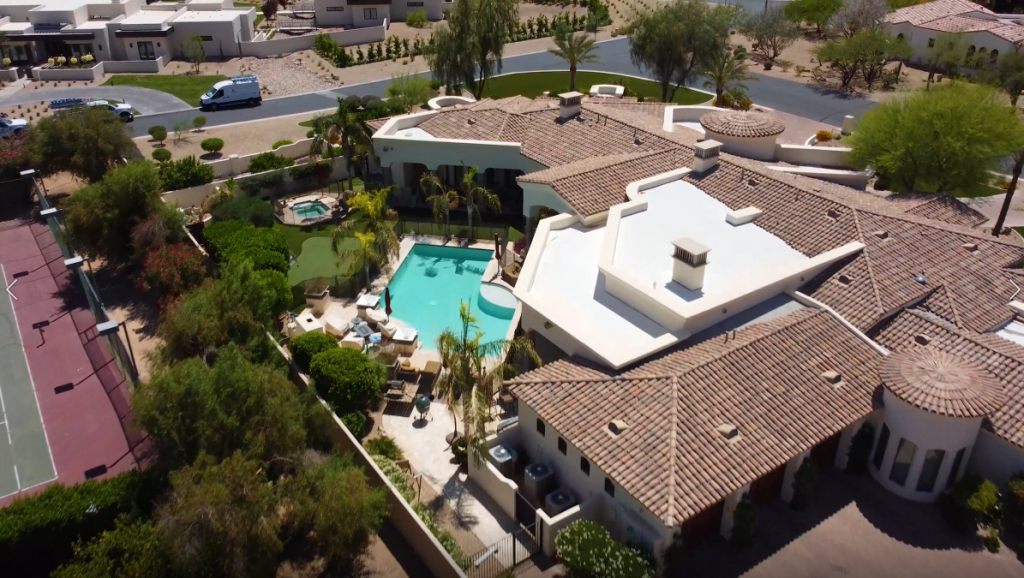 BACKYARD OF A PARADISE VALLEY HOME IN SCOTTSDALE ARIZONA

The schools in Scottsdale also come highly rated so you won’t have a hard time finding a great learning environment for your kids. Public schools in this area come more highly rated than private schools. But you won’t have a hard time finding suitable options for either public or private. When it comes to public schools, one of the best in the area is BASIS Scottsdale. This school has an A+ grade and is ranked #1 in Best Charter High Schools in America. Another great option is Phoenix Union Bioscience High School. This school also has an A+ rating and offers a 17 to 1 student-to-teacher ratio. For private schools look into Notre Dame Preparatory School. This school also holds an A+ grade and is ranked #3 for Best Catholic High Schools in Arizona.

Entertainment and social events in Scottsdale are bottomless. The state of Arizona, in general, is known for having a lot of urban sprawl and not a lot of centralized urban areas. However, Scottsdale is one of the exceptions to this rule. Scottsdale’s popularity has made it one of the most centralized urban metropolises you can find in the state of Arizona. This is why you’ll find no end to the activities you can participate in Scottsdale. If you want a high-class shopping experience then make sure to go to the Scottsdale Fashion Square Mall. Here you’ll find designer stores like 7 For All Mankind, AG Jeans, AllSaints, Hugo Boss, Bottega Veneta, Burberry, and many more. To experience a mixture of Arizona history and unique culinary experiences be sure to venture into Old Town Scottsdale. In Old Town, you can walk down Fifth Avenue and venture into the variety of shops to try on Native American jewelry, and look at Scottsdale’s historic art selection. While you’re there you must stop into FnB for some farm-to-table cuisine that’s mostly local to the valley. If you want a Mexican option check out The Mission. Be sure to order the guacamole that they make right there at your table for you! 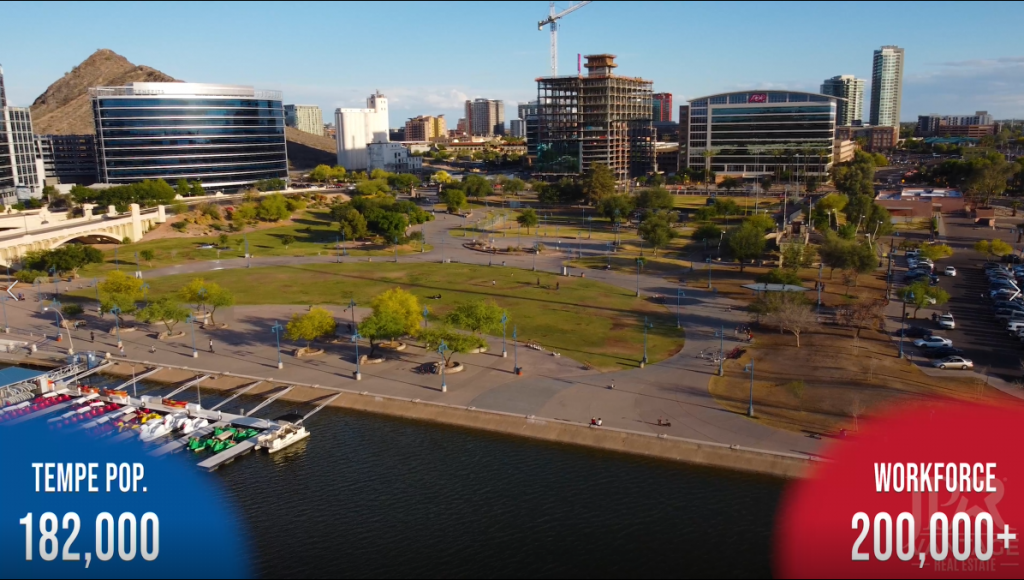 Tempe, Arizona is a very popular suburb in the state. This suburb is located in Maricopa County as well and is rated #7 for Best Suburbs to Live in Arizona. The population of Tempe is 187,454 people. The majority of people living in Tempe are going to be young professionals and even college students. Unlike the other cities we’ve looked into so far, Tempe’s residents are primarily renters rather than homeowners. With 59% of Tempe residents being renters and 41% of residents being homeowners. The median household income in Tempe is $57,994. The median home value in Tempe is $272,900. Which is very standard for Arizona, and is competitive price-wise with other cities in the state. The median rent in Tempe is $1,164. Which is still very standard for Arizona, but is not the cheapest rent you can find. This is because, as stated earlier, the majority of residents are renters.

Tempe holds a few notable rankings within the state, but not as many as some of the other neighborhoods we’ve explored. Even so, Tempe holds the #39 spot out of 228 for Best Cities for Young Professionals in America. This is why so many young business professionals flock to the area, and even college students come to Tempe to get their careers started. Tempe is also ranked #46 for Best Cities to Live in America out of 228 cities. Not to mention, the neighborhoods in Tempe also hold the #51 ranking for Best Cities to Retire in America out of 228 cities. So, don’t worry about being too overwhelmed with all of the youths living in the area. There is still a good mix of ages that won’t leave you feeling like you’re living in a college town. 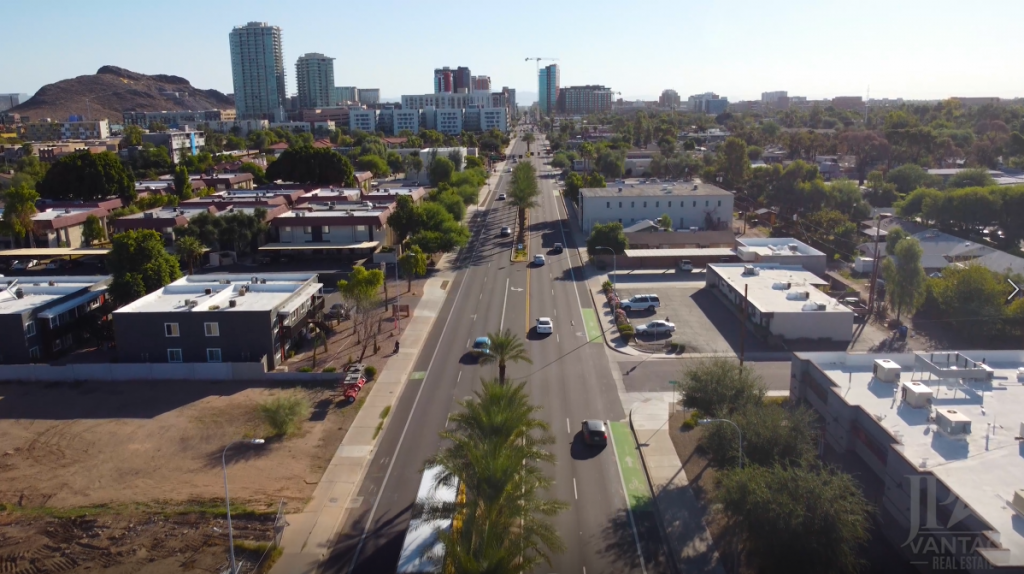 Tempe is home to Arizona State University, and for this reason, also has many excellent grade schools in the area. Some excellent public schools to consider are Tempe Preparatory Academy (ranked #8 in Best Public Middle Schools in Arizona) and ASU Preparatory Academy – Polytechnic High School (ranked #24 in Best Public High Schools in Arizona). Both of these schools are A+ graded schools. However, Tempe doesn’t have many highly rated private schools within its district. Still, if you’d like to place your kid into a private school check out Bethany Chrisitan School and Grace Community Christian School for some great choices. 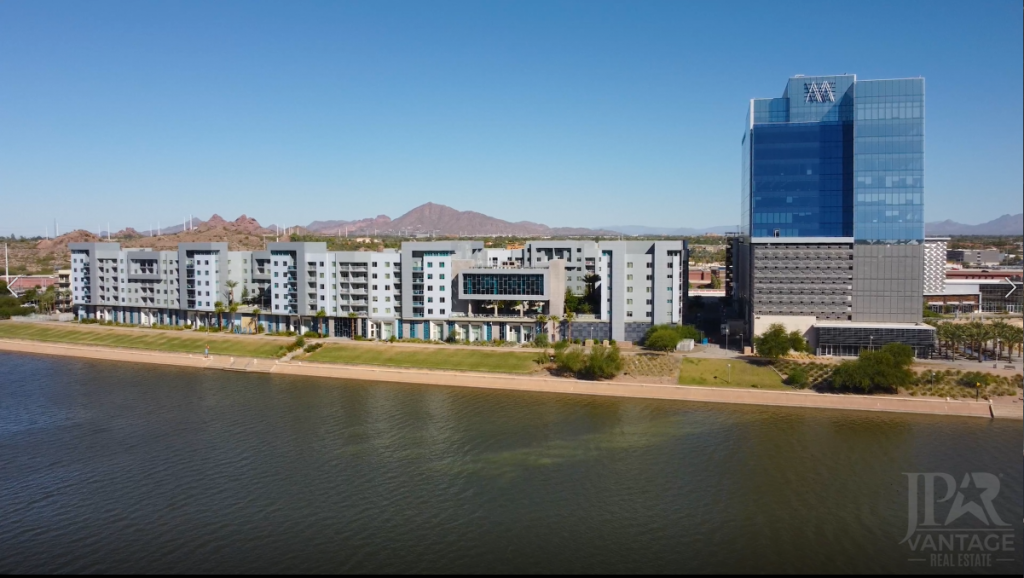 Since there are plenty of young residents living in Tempe, there are also a ton of unique activities to do in the area. Mill Ave is definitely one of the most popular spots to hang out in Tempe. The whole strip is lined with restaurants, bars, clubs, and shops. Stop into Snakes & Lattes for a unique experience combining coffee or alcoholic beverages with their selection of hundreds of board games that you and your friends can play while you sip. Loco Patron is a popular nightclub on Mill Ave that’s perfect for dancing the night away. Tempe Town Lake is also a must-visit. It’s beautiful to walk around the water any time of the year. But during the summer take advantage of being able to kayak on the water or rent a segway to ride around the lake.

All in all, the cities we explored in this article all offer unique amenities to their residents. Phoenix offers a connection to everything that surrounds the city and will place you in a diverse environment. Scottsdale has many high-end shopping and dining options and is visited frequently by people living in surrounding suburbs for this reason. Tempe brings a fresh, young vibe to the area and will always have a variety of exciting things to do. No matter what, you can’t make a wrong choice when deciding between these three Arizona cities.

All rights reserved. All information should be verified by the recipient and none is guaranteed as accurate by ARMLS. Information deemed to be reliable but not guaranteed. Listing broker has attempted to offer accurate data, but buyers are advised to confirm all items. Only IDX residential listings are displayed on this site. The information being provided is for consumers’ personal, non-commercial use and may not be used for any purpose other than to identify perspective properties consumers may be interested in. Information last updated on December 25, 2020 11:28 AM UTC